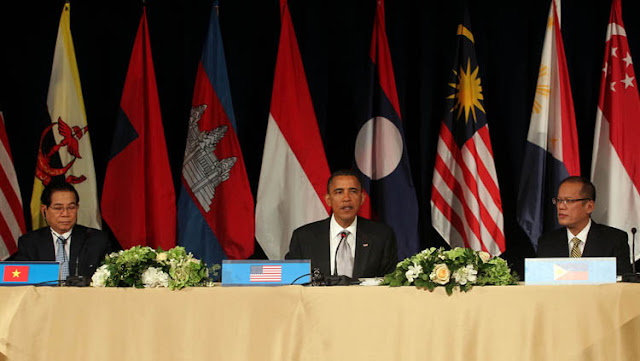 I'm sure we've all heard the brouhaha about the inverted Philippine flag at the 2nd Association of South East Asian Nations (ASEAN) US Leaders’ Meeting in New York last weekend, erroneously indicating the country is in a state of war. An apology was made. And the same was accepted by the Philippine Government. So let's leave that at that. But note that there are actually two more errors.

First is that the Myanmar flag was inverted as well. I find this quite disconcerting since this was fairly obvious since the blue box with the cogwheel and stars should have been on the upper left and not lower left as in most flags with the same box, the U.S. included. But the U.S. has had a history of inverting flags, including that of its neighbor Canada. Imagine inverting something as obvious as a maple leaf!

Just some trivia, Myanmar will have a new constitution, official name and flag this year that will come into force with the first sitting of the parliament to be elected in the November 2010 election. The Union of Myanmar will become the Republic of the Union of Myanmar. And the new flag will adopt the colors of their 1943 to 1945 flag, the first ASEAN country to have the color green in its flag. Notice how all ASEAN flags stick to red, white, blue, yellow or black. The color red is common to all ASEAN flags as well as that of East Timor.
Posted by Ivan Henares at 2:24 AM No comments:

National discipline should be on President Aquino's agenda

It's one thing to be a democracy. It's another thing to deserve it. If we are to truly succeed as a democracy, we have to be disciplined enough for it.

In my over 20 days around Europe, I have come to realize why they are progressive and continue to be progressive as they are today. It all boils down to discipline.

There are so many things I could suggest. And I'll write about them in future notes. But here are two simple suggestions I do hope President Aquino could consider for his agenda for the Philippines.

First on the list would be the phase out of jeepneys & privately-owned public buses in Metro Manila. Jeeps are an epitome of how backward the Philippines is. Drivers are undisciplined and have a total disregard for traffic rules and regulations. They are the primary cause of traffic in Metro Manila. Ever notice how smooth the traffic flow is during transport strikes?

They stop in the middle of the road to pick up passengers. They eat up several lanes and transform them into terminals. They do not care that they are holding up traffic behind them and do not realize that the result of their slowing down to pick up passengers is a traffic snarl that could stretch kilometers. They just stop where they want and block traffic behind them even if the traffic light is green.

It's the same story for the buses, especially along EDSA and Taft Avenue. They already have a yellow lane and yet they still get out of the yellow lane to overtake other buses in the race for passengers. Both jeeps and buses are also among the main causes of air pollution in Metro Manila. Imagine how bad our smog is, flights from NAIA got diverted as a result! Isn't that a wake-up call?

We should replace these jeepneys and buses in Metro Manila with an efficient and effective integrated transport system composed of rapid transit, buses, trains, ferries and even trams. Efficient means transport is on schedule and on time all the time. Effective means transport is conveniently interconnected and able to comfortably ferry passengers anywhere in Metro Manila. I was quite happy that I needed only one ticket for rapid transit, buses and trams in various cities in Europe. Plus the interconnection was so effective and convenient.

The new transport system will train Filipinos to be disciplined. It will force people to line up at designated bus stops and learn to wait for their turn. We should disallow public transport conveniently stopping in front of a passenger's destination and train Filipinos to get off at designated bus stops and walk to and from there. It may be inconvenient, yes. But it will speed up traffic and ensure that all of us will get to our destinations on time. We need buses that could care less if only one person boarded at a stop and leave soon after because it has a schedule to follow.

If transport is clean and reliable, leaves on time and arrives on time, it will also encourage Filipinos to use public transport because we know we will reach our destination on time. No need to use a car because it would be more convenient and cheaper to get around on public transport. No more sitting down and sweating in a cramped up jeep. I'd like to see the day when people in business suits wouldn't care less to use public transportation because they won't have to worry about arriving late, walking too far, getting dirty from the dust and pollution or getting sweaty from the heat and humidity of Metro Manila.

Finally, it will get rid of a good amount of smog because jeepneys & buses in Metro Manila are among the number one air polluters! Ever wonder why those hoodlums in Makati claiming to be emissions testers never bother to flag down jeepneys and buses when they are the number one violators?

My second solution for national discipline is simple. I've had it seeing candy wrappers, mineral water bottles, plastic bags or corn cobs being thrown out the windows of buses, jeeps and even private vehicles, or even by people walking along the street. I've always kept my litter in my pockets or held on to it until I find a trash can. One would say, then increase the number of trash cans. Unfortunately, that will not work since when I was working with an LGU, I was told that trash cans are usually stolen and made into personal property.

So one solution I could think of to remind people to mind their own trash is to require all fastfood restaurants to let their customers eat from their trays to keep the tables clean and throw their own trash in the garbage can after they eat. We are so used to removing our food from the trays and caring less if the table gets dirty knowing that someone will clean up after us. If more developed countries such as the U.S. and those in Europe can do it, why can't we? We're so used to being served, we can't even get rid of our own trash. No more waiters cleaning up after us!

The first proposal is long-term and a big investment, but with a large range of effects that will strengthen our national discipline and value for time. I hope the president has the political will to implement it because it can easily be done in six years.

The second proposal is quite simple. It will be difficult to enforce at first. But once we get it done, it will have a psychological effect on Filipinos, reminding us that we should be responsible for what we do.
Posted by Ivan Henares at 4:03 AM No comments: